Meaning Of The Tower 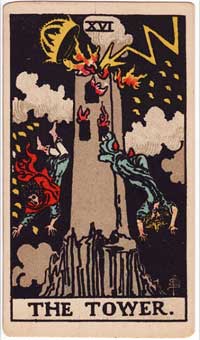 Navigating The Tower’s Meaning Through Its Perspective

At the top of a mountain peak, a stone tower struck by lightning uncovers the top, made up of a crown. There are three windows from which flames spread. Two people are falling; one of them has a crown on his head. In the background, against the black sky, curls of grey smoke stand out. Small sparks dot the darkness. This card recalls the myth of the Tower of Babel, built to reach God and compete with his glory, and never finished because the workers who worked there, struck by divine curse, began to speak in different languages without being able to understand each other anymore. This is why the Tower is traditionally associated with the punishment of pride. However, by carefully reading the passage from the Bible in which the Tower of Babel is mentioned, one realizes that its meaning is far from catastrophic. More than a punishment, the destruction of the Tower is the solution to a problem: the flood has just ended, the entire planet, abundantly irrigated, has become fertile. Remarkably few human beings have survived, who instead of dispersing to cultivate the fields, gather to build a tower which, rising to the sky, reaches God. At first this construction is intended to be an act of love, the desire to know the kingdom of the Creator. Well, knowing that it is an impossible project, he does not hit the Tower with lightning, he does not make any of its inhabitants fall down. He just creates the diversity of languages to separate them. It is a blessing rather than a punishment: men set out to conquer the land and return to work it.

Keywords for The Tower Tarot Card Upright:
Rupture, shock, sudden change, a change for the better

The Tower Upright meaning:
The Tower refers to a painful but necessary conflict, a drastic and sudden change. To get out of a critical situation, which has become unsustainable, all that remains is to destroy the balance, now stagnant, and accept change, in any existential sphere that proves necessary. It refers to the need to measure oneself with reality and to reduce excessive claims with common sense.

From an emotional point of view, it can indicate love at first sight for those who are alone, a crisis that brings clarification for those in a couple or, when the relationship has come to an end and no longer satisfies any of the partners, a painful but healthy breakup. From a professional point of view, it refers to a defeat that allows you to evaluate better your possibilities, a change of opinions and work. It can also represent a rebellious person who will upset the life of the querent resulting in significant changes.

The consultant finds himself a prisoner in a sort of dead-end, in a crisis from which he feels unable to recover. Despite the painful collapse of illusions, the querent refuses to accept reality. From the emotional point of view, it indicates a sentimental disappointment, a problematic and thwarted love. From a professional point of view it indicates dismissal, breaking of a contract, a big disappointment at work. It can also represent a materialistic and ambitious person, angry; an enemy determined to do harm.