Meaning Of The Star 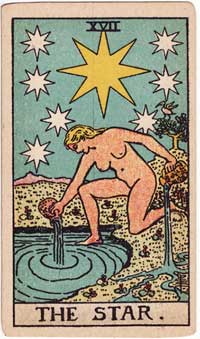 Navigating The Star’s Meaning Through Its Perspective

The card represents a naked woman kneeling under a starry sky, the first human being to appear naked in the Tarot, before the Arcana XVIIII, XX and XXI. With it begins the adventure of the being that has reached the state of purity, of detachment. The woman represented in the Star, therefore has nothing to hide. The gesture of the woman bent on one knee recalls the act of adoration that the ancients addressed to the gods by pouring a cup of wine into the fire or water. Her knee placed on the ground can also be an anchor sign: she has found her place on Earth and enters into communication with the cosmos. The woman pours two liquids from two amphorae: one, which seems to flow from sex and is poured from her left hand, falls to the ground; the other is poured by the right hand into the water which will form, in the following card, the pool of water from which the Moon shrimp emerges. There you can see the image of spiritual water (yellow) and sexual or instinctive water (blue) which together nourish the surrounding environment. It is possible that one of the amphorae is receptive and captures the energy of the blue river, while the other pours starlight into it.

The Star Upright meaning:
The Star always indicates a particularly favorable situation to the querent, who can count on heavenly protections and help. It indicates the point of arrival, the conclusion of what has been done in the past, the realization of the efforts made: a satisfaction, a reward, a realization of dreams and hopes or a new beginning, a new perspective from which to start again.

It can also represent a balanced person who is disinterested in material matters, who knows how to give good advice.

The Star Reversed meaning:
With the overturning of the card, luck turns into bad luck, the unfavourable moment, in a difficult period, without opportunities. It is generally a condition of unease on all fronts, marked by frustrated or at least not yet realized hopes. The wait is long and the querent, too sure of themselves and too unreasonable, struggles to adapt to it; they can then manifest contradictory attitudes: imprudent actions, obstinacy, mental rigidity; take refuge in daydreams, apathy, laziness, pessimism. From the emotional point of view, it indicates coldness in the couple, incommunicability, mutual disinterest. From a professional point of view, it shows dissatisfaction, frustrating and poorly paid work. It can indicate a cold and false person; a mediocre individual who considers himself a great artist.