Meaning Of The Devil 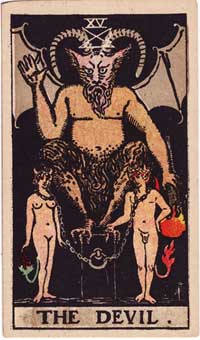 Navigating The Devil’s Meaning Through Its Perspective

A naked man and woman are chained before the Devil. The chains seem loose, such as to allow escape. The woman has a tail that ends in what appears to be a bunch of grapes, while the man’s tail is on fire. Both individuals have horns on their heads. The Devil sports bat wings and large goat horns, his right hand is raised, while in his left he holds a torch whose flame is pointing downwards. On his head stands an inverted five-pointed star. The background of the card is black. The characters on the card are a mixture of human and animal and allude to our primary powers, to our prehistoric memories buried deep in the unconscious. This characteristic reminds us, thanks to different esoteric signs that adorn the characters, that to reach enlightenment, the initiate must not deny the animal side but rather accept it and guide it towards the divine light. The Devil, having been an angel, manifests with his torch the deep desire to ascend again towards the light. Similarly, the human soul that sinks into the carnal body feels the deep desire to go back to the origins, to the creative divinity. The expression on the Devil’s face is ambiguous: it suggests both deep concentration and a childish grimace.

The Devil Upright meaning:
Like Arcanum XIII, the Devil can initially frighten the reader. It bears the weight of all moral and religious prohibitions and evokes the image of evil. In the prevalent mentality, the Devil evokes money, tempts human beings with an attractive contract, an easy and fast wealth: he can suggest money income or everything related to important financial transactions, sometimes shady or secret. It is the great tempter who, in the material realm, refers to the desire for wealth. It is also associated with the announcement of a great passion, a temptation, a love adventure. The Devil can indifferently lead to luck or to ruin. Instead, it is always a good omen for matters related to creativity: it suggests profound talent, inspiration, and intense creative energy.

It can also indicate an energetic and magnetic individual, gifted with great charisma, a passionate lover.

The Devil Reversed meaning:
The current situation, which has its roots in past choices and attitudes, is fraught with negativity, dangers and changes unrelated to the will of the consultant. The upside-down Devil can refer to weakness, energy shortages, inconclusiveness, fear of responsibility and the unknown. It can also refer to an absolute lack of rules, especially in the sexual field, to immoderate egocentrism, anger and envy. From an emotional point of view it indicates an interested love, betrayals, lies, extramarital affairs accompanied by a paradoxical jealousy towards the partner. From a professional point of view, it indicates enmity in the professional environment, strong competitiveness. It can also indicate an enemy, hostile, violent and selfish person, unscrupulous; an attractive but harmful seducer for the reader.