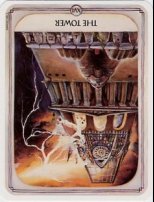 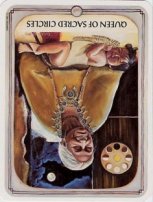 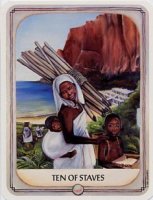 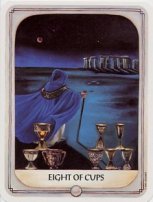 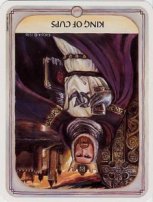 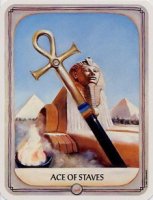 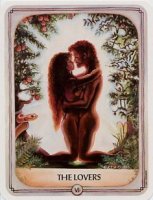 Deck: Ancestral Path
Question: My husband and I are very close and it seems we have the perfect relationship – we can almost read each others’ minds, and complete each others’ thoughts. Yet sometimes it feels like we have no challenges or places left to go in our relationship. I wonder if we have been with each other in other lives, and if so, what our purpose is in being together again in this life? What are we intended to do or learn?

Spread: Prior to conducting an in-depth past life reading, it is helpful to get an overview of how this relationship developed, when it began, and what has happened since, using a past life connections reading. The reading is done in this way – First, the Fool is removed from the deck and set aside. Then nine cards are selected from the deck, and the Fool is mixed into them. The Fool represents the point at which you and your husband first met. The cards are laid out into three rows of three, and when the Fool appears, the next card is placed on top of it. The top row represents your current life together. The middle row represents recent past lifetimes, and the bottom row represents older lifetimes. If the fool appears in the top row, then this is your first lifetime together. The cards get older as you move to the right and downward. Cards above and to the left of the fool represent lifetimes together, cards to the right and below the Fool can be discarded or read as commentary on the relationship.

In this case, the Fool appeared in the center of the bottom row, indicating that you and your husband have spent many lifetimes together. The only card to the right of the Fool was the Lovers, which seems appropriate. Discarding that card, I will describe the eight cards in order, from the bottom up, right to left (oldest first). I should note that in the focusing reading, the suits of the cards in this deck represent literal cultures, rather than their normal elemental meanings. We are looking for court cards and trumps that may be having an important influence on the current life, as well as other patterns that may emerge, that we may wish to explore further in an in-depth past life reading..

The oldest three lifetimes are all set in Africa. All of these cards are upright, and represent an orderly progression from the Three through to completion with the Ace, at which point this series of relationships has achieved its purpose and ends in mutual fulfillment. Brief descriptions of these cards and the lifetimes they represent follow:

Three of Staves: The Staves in this deck all represent African/Egyptian themes. The first lifetime appears to be as husband and wife, disembarking from a ship into a new land. In this relationship, the partners are fertile with children and crops. They are the parents of many generations of children, who spread out and colonize a new land.

Ten of Staves: This card represents a later lifetime in which the partners appear as mother and child. They are in the working class, possibly even slaves, but they are not suffering unduly. In this lifetime the partners work out how to share burdens, distribute the load, and take responsibility for the overall welfare of the family.

Ace of Staves: A great Ankh rises over the Sphinx and Pyramids. In this last lifetime, the two are equal partners who work together to achieve some great task. They are successful, and complete their work on earth, ending this cycle of relationships.

At this point, the Lovers separate, and each goes off to experience something new. Your husband’s recent lifetimes have been spent in medieval cultures in Europe, while you traveled to North America and became an American Indian. These new experiences were more difficult for each of you, as represented by the reversals. These more recent lifetimes both have unresolved issues associated with them:

King of Cups, reversed. The Cups in this deck are representations of European culture, and the King of Cups is depicted in medieval garb with a celtic cross behind him, and a castle in the distance. His undergarment is emblazoned with a dragon. Your husband lived to maturity, but had a difficult life. The reasons for that are difficult to tell from this one card, but could be explored further.

Queen of Sacred Circles, reversed. The Sacred Circles are the Native American suit, similar to Pentacles or Disks. The Queen is depicted as a wise old woman, possibly an elder, inside a hogan, with the moon overhead at night. She watches over a child benevolently. Like the Queen of Pentacles, home and family are very important to her. Similar to the King of Cups, she lives to maturity but ends this lifetime with unresolved issues.

Now you are back together in your current lifetime, the reasons for which are not yet clear, since you have already had one complete cycle together that ended long ago. For some reason, you have come back together again. This incarnation appears to be primarily influenced by the European culture, and is a fairly well-established relationship. The three cards in this row are read right to left, as follows:

Five of Cups: This is a very interesting card to have representing the beginning of the relationship. It represents the moment when King Arthur suspects that Lancelot and Guenivere are committing adultery, and is consumed by bitterness and regret. Lancelot also behaves inappropriately, because he and Guenivere share an old karmic bond that he does not understand. She tries to make peace, but fails. This may represent some early bitterness or jealousy with another lover, an event early in your relationship that has been overcome with time. I am wondering if you represent Guenivere, and were actually meant to be with someone else in this life (King Arthur) but were drawn to your husband when he entered your life due to your many past lives together. Alternatively, this could just mean that the relationship got off to a rocky start due to other parties being involved.

Eight of Cups: In the center is this card, which is very similar to the Eight in traditional decks. In this case, the journey into the night leads to Stonehenge, which may represent something important to you, a druidic or celtic tradition. At some point in your marriage, one or both of you became more interested in spiritual pursuits, and has lessened their involvement in the mundane world in order to spend more time on spiritual studies.

Reversed Tower: This is a very interesting tower, which has runes and a stone circle at the base, a sphinx above that, and a traditional European cathedral on top, which is getting blasted with lightning. The other cultural traditions at the base of the tower represent your past lifetimes and are relatively unharmed by the lightning, while the European edifice is being demolished. This card is likely still in your future, near the end of this life or after. It could represent an almost accidental resumption of a previous relationship that you both were meant to have moved on from. If so, this may lead to a crisis for you both at some point in the later stages of this lifetime’s relationship or after death, when you realize that, although it is enjoyable to be together again, this is not what you were really intended to be doing at this point in your spiritual development :-).

There are three cards here that it would be especially productive to explore in more detail, using an in-depth past life reading. With your husband’s permission, we could look in greater detail at the series of recent lives where you were separated from one another, and what happened to each of you then that caused you to resume your previous relationship. We can also look at the Tower in greater detail, to see how this may play out in the future.