The Meaning Of The Moon Tarot Card 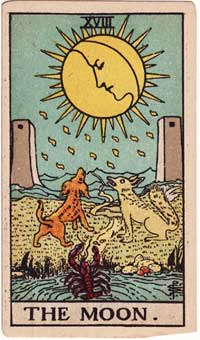 Navigating The Moon’s Meaning Through Its Perspective

It is a clear night, illuminated by the full moon in its absolute splendour. Not a cloud disturbs the deep indigo blue that reigns in the sky and the silver beams of moonlight seem to caress the surface of the earth creating whimsical shadows that awaken the imagination. The night offers shelter for those who need to hide, but the shadows don’t only conceal, they also confuse, creating shapes that can make a wanderer believe that they’re being observed.

Two towers are illuminated by the light of The Moon, that reflects on a creak that runs up to a natural pool from which a crab is emerging. A dog and a wolf stand on each side of the creak, two faces of the same coin, the tamed one and the wild one, the known and the unknown, the one you can trust and the one who may bite.

It is in this witching hour that mysteries take place and those who delve into the occult call upon their intuition and start their sacred practice. There’s a silence broken by the whisper of nature, or perhaps the very spirits of the place delivering their mysterious messages? In the deepest darkness, a blue lining starts appearing far away in the horizon, the confusion of the night is about to come to an end, and clarity will reign again.

Keywords For The Moon Upright:

Keywords For The Moon Reversed:

Deceit, confusion, things are not what they seem, secrecy, fear.

If you draw The Moon in a reading, it could be interpreted as a strong call to follow your intuition, specially if there’s a doubt that has been eating you inside or if you are suspicious about something. It could also be interpreted as a call to be receptive to the signs that you may be receiving, either in your dreams or from the Universe, ancestors, spirit guides or the like.

Your dreams may become particularly important these days and could be warning you against something or trying to convey a message. It would be fantastic to get a diary!

If you are enquiring about the outcome of a situation, The Moon indicates that it is not yet clear.

Ill-aspected or reversed, The Moon indicates that you don’t have all the information about your situation and that it could be being kept from you on purpose. It is a card that warns you against deceit, and it could be indicating that you need to get to the bottom of things and pay special attention to your surroundings, especially if you see signs of lies around you.

This card in combination with The Fool could be telling you that you are obsessed over something and you need to find ways to relax and let go of your concern before it consumes too much of your energy.