The Meaning Of The Magician Tarot Card 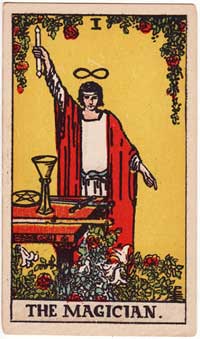 Navigating The Magician’s Meaning Through His Eyes

The sun is setting as the night approaches, filling the sky with bright shades of warm colours in this liminal space between day and night. A man dressed in well-kept ceremonial clothes is carefully preparing an altar. His movements are systematic and calculated, but he looks comfortable in his duty and moves around easily, as only those who have repeated the same task dozens of times can do. The table is humble but solid, as are his tools, witnesses to hundreds of rituals.

He stops for a moment to look at the items displayed on the top of his table. The sword, the chalice, the pentacle and the wand, one for each one of the elements that form all that is known. He smirks, knowing that his tools are just means for the magic that is about to happen, knowing that he is the one who holds the essence of spirit.

He holds his skepter with determation, his right pointing towards the sky, his left pointing towards the earth. Before him, a luscious garden of scented flowers, creating a mystical space where only magic can happen. The Magician starts his ritual; He commands the elements to do his bidding, being a channel between worlds, between planes, between the physical and the spiritual. When he is done, he packs his belongings, ready to leave, not a trace of doubt in his mind that his work has created the intended change, because he is the master of the elements.

Keywords for The Magician Upright: Control, balance, having the upper hand, having everything you need to fulfill your purpose.

Drawing The Magician in a reading is a sign that you need to take control over the situation and start managing your possibilities so that they work for you and not the other way around. Use your knowledge as well as your experience and trust your skills to make things happen. This is as well a card that asks you to make sure that your intentions are aligned with your actions and that you’re being consistent.

Depending on the context, it could be interpreted as having the upper hand in the situation or having more power than you realize over the matter. In certain cases, it indicates that you can manipulate the situation to your favour or that you have what is needed for turning the circumstances in a way that benefits you.

Ill-aspected or reversed, The Magician encourages you to watch out for manipulation and deceit. Someone aroun you could be trying to manipulate your decisions! The Magician is a bit of a car salesman, and when it comes up reversed, it’s time to make a pause and look around for hidden agendas, particularly if you’re being rushed to make an important decision.