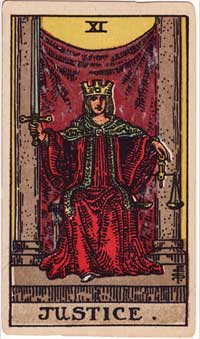 Navigating Justice’s Meaning Through Its Perspective

A stern-eyed woman sits on a stone throne, between two stone columns. She wears a red robe and a green cloak. In her right hand, she holds a sword with the point upwards; in the left, she holds a balance. A small red circle is seen in the centre of the chest, while a blue square is on her crown.

Keywords for Justice Reversed:
Injustice, indecision, being off balance

Justice Upright meaning:
The general meaning of this card is easily understood and is linked to justice. However, understood not only from the point of view of fairness, but also of harmony, balance, and firmness of opinion. In general, the meaning when the card is straight is not necessarily positive: the basis is that everyone reaps what they have sown, so if we have sown well the result will be positive, if we have sown badly we must fear negative consequences. Justice forces us to look within, trying to understand what we did right, what we did wrong, and make the right decisions to move forward. It also indicates control, which is particularly important in difficult situations, and also time: Generally the time it will take to achieve what we want: for the situation to settle down, even if a long time. The meaning of control is also reflected in personal and work relationships: the situation will tend to improve, but only if we know how to respect harmony and balance, overcoming the obstacles that will be posed (also in relation to the other cards that are present: the more justice goes forward in the deck, the more obstacles there will be and consequently the longer the time necessary to overcome the difficulty will be extended. Justice also indicates everything concerning the law, institutions and legal relationships with other people.

Justice Reversed meaning:
It may indicate that to restore the balance there will be quarrels, that there will be inequities usually committed by others and even if we are on the right side, the situation will not, in general, be positive for us. Delays will also be frequent (it is linked to time), setbacks, slowness and, more generally, uncertainty, which will continue until we reach the end of the journey. It can also indicate the lack of responsibility, the lack of organization, of rationality. In some cases it also indicates excessive judgment, excessive zeal in applying justice or even too rigid moral judgments, which can put others in difficulty, even though justice remains on the whole. On a personal level, it can indicate a lack of judgment about oneself, but also about the people around us, or a lack of trust in other people. With regard to the law, it can indicate the complications suffered in legal matters, but also the arrival of unexpected legal problems, which will wear us down for a very long time. In general, therefore, a difficult and obstacle-filled condition awaits us, although the “compass” of justice will continue to be important in different situations.