The Meaning Of The Hierophant Tarot Card 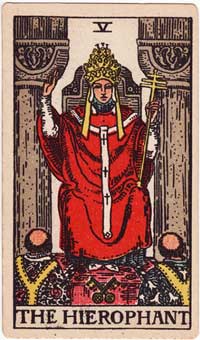 Navigating The Hierophant’s Meaning Through His Eyes

The silence is so intense it can almost be touched. The air is filled with the intoxicating smell of burning incense that adds a nuance of sacredness to the scene. It is a colossal cathedral, its solid, wide walls provide a fresh environment and this feeling of protection that only those ancient buildings, built to be witnesses of future generations, offer to bystanders.

The Hierophant sits in his throne while two figures await his instructions, maybe his knowledge, or perhaps just his blessing. Both men are kneeling before him, after all, he’s the one who has been chosen to lead their spiritual path and he holds the key to what they feel is sacred. The Hierophant is looking firmly towards the front, knowing of the power in his hands given to him by centuries of tradition. He’s the living legacy of his Mesiah.

One of his hands points towards the sky, while the other points slightly towards the earth, he’s the connection, the messenger between both, the envoy of the divine commanded to do his bidding here on earth. It is a life-long commitment to a solid endeavour, and he’s more than willing to comply, until it’s time to pass the key to the next one who is willing to continue building on the legacy that was once entrusted to him.

Keywords for The Hierophant Reversed: Resistance to evolution, staying in what’s comfortable, not analyzing your beliefs and accepting blindly.

Drawing The Hierophant in a reading suggests that you’re getting yourself into something solid and built to last, or that you’re currently laying the foundation of something that will be relevant in the future. It is as way a card that is very in touch with the most traditional side and that encourage you to try the true and tested ways to make things work, even if it is not what you had in mind.

This card could be interpreted as a symbol of stability and in certain context it can be a very positive omen that indicates that you are walking on safe ground. It is as well a card that can call you to challenge your beliefs in a positive way, identifying those that are genuine versus those that have been passed on to you but hold no relevance or are more of a burden than a constructive thing in your life.

It is also a card that could be speaking about deals and agreements that are long-term, such as marriage, business partnerships and wills.

Ill-aspected or reversed, The Hierophant suggests that you might be too stubborn or set in your own ways and that opening your mind is required if you want to make progress. This card tends to come up ill-aspected in moments of frustration, when you have made sure that you have followed “the book” and the results are not the ones that you expected. It is time to let go and think outside the box!