The Meaning Of The Emperor Tarot Card 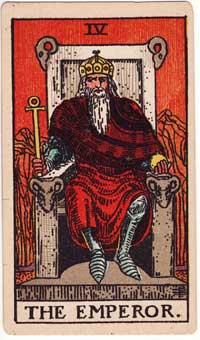 Navigating The Emperor’s Meaning Through His Eyes

It’s a mountainous landscape, ancient as the world itself, awe-inspiring by its greatness, topped with a castle fortified by solid walls. From there, you can see all that is around. It’s the castle of The Emperor and the world is at his feet.

He’s majestic, sitting in his throne, made of the stone from the same mountains upon which his magnificent castle has been built. Four ram’s heads, symbols of his power and masculinity decorate the seat. His expression is calm yet severe, his position firm, both arms resting, both feet firmly set on the ground. He controls the surroundings, conscious of his great power.

His garments are of an intense red, the colour of power, passion and life-force, but he’s as well wearing an armour, permanently ready for the battle. He is always prepared to deal with whatever is thrown at him, protected against danger, ready to attack if the circumstances so require. He knows that is power is great, but also that it is not granted, and if necessary he will present a battle for it.

Shielded against danger, he’s also shielded against emotion. He needs a cold mind if he is to preserve his rule, and while he has privileges that others can only dream, he knows he has a duty bigger than himself. His crown gives him power, but it also reminds him of the weight that he has on his shoulders, the duty to which he has tied his very fate.

Keywords for The Emperor Reversed: Entitlement, out of touch with emotions, self-centeredness, drunk in power.

Drawing The Emperor in a reading is calling you to wear your “big boy/girl pants” and step up. It is a card that mainly speaks about your responsability in the situations that you find yourself into and that calls you to gain control over your circumstances. This card could also be suggesting that you have a responsability to tend to, and that there is where your main focus is needed.

It is also a card that asks you to see the big picture and to act rationally. The Emperor can be an utilitarian, and it is asking you to look at the greater good, either for you or for those around you.

In situations where you are enquiring about what can you do in regards with a situation, The Emperor commands you to let your brains control this one and to be objective and cold-minded towards the situation, leaving aside the most emotional side and thinking clearly and rationally about how things are, avoiding holding on to false hopes and desires and looking at things for what they are so you can act in consecuence.

Ill-aspected or reversed, The Emperor warns against being excessively inaccesible or unavailable to others and calls you to consider whether you are being fair or whether you are abusing a position of power that has been given to you or taking too much advantage of a situation in which you have the upper hand.