Meaning Of The Death 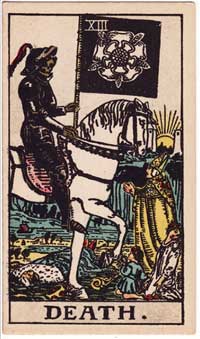 Navigating Death’s Meaning Through Its Perspective

A skeleton in black armor sits on top of a white horse, in his right hand, he holds a flag depicting a flower with five petals. In front of him is a priest with folded hands and two children; on the ground lies the body of a king. In the background, we see a boat on a river, and two towers between which the sun shines. In some decks the 13th card has no name, tradition makes the mistake of superficially attributing to it the meaning, and sometimes even the word, of “Death”. This misunderstanding deeply affects the interpretation of the Arcana. The central figure is a skeleton equipped with a scythe, which, in popular tradition, represents Death. The name of this character is not indicated but only the number, 13, an ambiguous number, now a good omen, now not. Death destroys the body and all the sweetness of life, but also pain and despair.

Death Tarot Card Upright meaning:
This Arcanum requires a particular delicacy in interpretation; in fact, some querent’s are scared to see this card. However, it does not refer to gloomy predictions but indicates a remarkable transformation and imminent changes, the necessary abandonment of the past to enter a new future. It is not necessarily an easy change: seeing one’s illusions collapse, closing with the past, severing bonds or established habits always causes suffering. However, when a change is desired, Death card brings it about with such rapidity that it can provide significant relief. Sometimes, Death expresses the need to manifest an energy which, for the moment, cannot express itself positively. From an emotional point of view, a drastic change occurs within the couple, in the sense of a strong action, a clarification that leads to reuniting the couple or, when this is no longer possible, a painful but positive break up for individual evolution.

From a professional point of view it can indicate a change of job after having overcome a series of obstacles. It can indicate a lonely person, a person who rebuilds their life after great pain. Death, therefore, implies a radical change of state, a change that occurs only if the previous way of being dies, a transformation. The passage can be painful, difficult, it can throw us into despair, melancholy, disturbance, but it is nevertheless indispensable for spiritual evolution.

Death Reversed meaning:
The overturned mystery signals that the decline is now over and the negative aspect of any suffering linked to change is also reversed. It, therefore, indicates renewal, regeneration, evolution of the personality. It is passing from one situation to another in a positive sense. New projects and dreams believed to be unattainable unexpectedly materialize. New spaces, new knowledge, new situations. Both mental and emotional rebirth, energy regeneration.